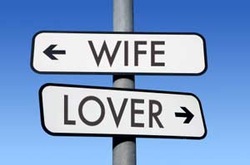 John is stuck between his loyalty to his wife and his love for another woman. For the past few weeks, he's been counseling with me, hoping to gain enough clarity to move one way or the other. But he remains undecided, weighing the benefits and consequences of each choice, vacillating between them, hoping for a clear indication of which one will bring him maximum happiness or minimum regret.

He spends a lot of time focusing on these two women in his attempt to discover a measure of certainty, but fears the risk of choosing one over the other. If John doesn't change his focus, he will likely remain trapped in his confusion until his circumstances degenerate to a point where one or both of his options remove themselves. If this happens, if his choice becomes a choice by default, he will not find much lasting contentment in it.

John is making a critical error. He has failed to understand that unless his decision is based on a firm conviction of who he is and who he is becoming, he is like a rudderless boat caught in a storm, waiting to see which way the wind will blow him. He needs a rudder. He needs a firm conviction about the direction of his life. The clearer that vision becomes to him, the easier this choice will be.

The questions that have been swirling in John's mind have been: Who do I love more? Which relationship brings less risk? Less regret? More happiness? Who do I want to spend my future with? What would be the positive and negative impacts of each choice? But he finds no real confidence in his answers. Instead, he should be asking questions like these:

We need a rudder; we need a conviction of purpose that remains constant even when life around us becomes a storm of confusion.

Honestly, once a man is caught up in the emotional turmoil of an affair, it is very difficult for him to pull himself out long enough to give careful consideration to these other questions. The passion of his heart is so strong that, once it is set in motion, he feels it must take its course. I have been witness to the numerous shipwrecks at the end of these journeys. But it doesn't have to be this way.

When Craig came to counseling with his wife, he admitted that the current affair was not his first one and that he still had an emotional longing for the woman who had been his most recent lover. But he recognized a pattern in his life that he wanted to break; he longed to be a different kind of man, a different kind of husband. Over the next months, his commitment to honesty and change became the foundation for a whole different way of experiencing love. He has a clear perspective of who he is becoming. It keeps him on course.

If you are caught in the kind of crisis I've described here, get some help. Talk to a counselor, or a pastor, or a healthy friend. Find your rudder and then move with purpose. But if you are not in this place, all the better. Do the work of rudder-building now while the waters are relatively calm. You'll be better prepared for whatever waves are ahead.