Guard Your Heart After an Affair

Your spouse's infidelity may have caused a pain deeper than any hurt you have previously experienced. You want it to be over. But if you are not careful, you run the risk of being wounded again and again.

I've watched many betrayed spouses, desperate to save their marriages, assume the responsibility for making things "right." While their partner remains confused and disconnected, they insist on counseling, attempt to establish strong boundaries, repeatedly overlook ongoing bad behavior, or work desperately to change in ways that will attract the wayward spouse.

When an affair is first discovered, the cheating spouse will often have an initial response of denial and defensiveness. For a few days, perhaps weeks, the betrayed spouse will be the one more focused on recovery and more determined to move toward change. [See The Necessity of Vulnerability.] But this is not a pattern that should continue, even though I often observe it going on for months or years.

Consider "Pam," married 27 years to "Hank." Hank's affair started nearly four years ago with a woman he met while attending a conference. The relationship was emotional and romantic and became sexual during subsequent encounters. Pam found out about it a few months later.

Hank felt guilty and feared the many consequences that might result from an affair, including how it would affect his children. He agreed to come to counseling. But from the start it became clear that his attachment to the other woman was not something he was willing to give up. Instead, he continued to secretly contact the other woman, get caught, lie then confess, and agree to keep working on the marriage.

This happened over and over again. Before the affair, Pam was convinced that if Hank ever cheated she would leave him immediately, but now found herself repeatedly accepting him back. Each time she hoped that this would be his final failure.

At the beginning of their counseling, I encouraged her to offer him grace. I encouraged her to invite him to a process of recovery and then hopefully but cautiously observe his changes. Until Hank assumed the responsibility for leading their recovery, Pam remained vulnerable. As it became evident that Hank was not willing to embrace her invitation to focus on their marriage, I encouraged Pam to establish clear boundaries... to place Two Guards in front of her heart (representing her vulnerable connection to him). She could continue to invite Hank to join her in the healing of her marriage, but she should wait until he was willing to do so. And the sincerity of his willingness would be demonstrated by his response to the question that each Guard asked before letting him into her heart again.

Hank followed the typical pattern of going back-and-forth between his lover and his wife. Pam always ended up letting him in again. She told her Guards to stand down and let him in, even though his honest answer to the First Guard was "I'm still confused" and to the Second Guard was "I just want to forget all this and move forward; she needs to do the same."

She was too fearful. After 27 years of marriage, she was afraid of what life without Hank would mean. And she feared that maybe she wasn't good enough to survive on her own. Her husband's rejection had stripped much of her confidence away. She was angry, too. She didn't want the other woman to "win" this fight.

Each time she let him in, she would experience the familiar pattern of his disconnection from and, eventually, reconnection to the other woman. He spent long weekends with the affair partner. He went on trips with her. He even told Pam how great the sex was and how he didn't think he could ever let her go. Then something would go wrong in the affair relationship, he would let Pam know he wasn't happy and wanted to work on the marriage again, she would let him back in without letting the Guards investigate the truth, experience a brief moment of hope, and then be crushed when he left again.

Pam did this for three years. She is a smart, attractive, career woman... not someone you would normally think of as weak. She hates herself for putting up with this for so long. And she is far from alone. I've witnessed many men and women trapped in the same painful pattern.

They need to trust the Two Guards. They need to refuse to open themselves up to vulnerable connection until their partner can give a confident "YES!" to both questions. 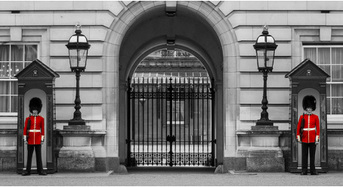 Photo Credit: Hadock via Compfight cc
First Guard's Question:
Are you single-minded in your desire to restore your marriage?

Second Guard's Question:
Are you willing to change in ways that will allow your spouse to heal?

If your spouse stays caught in the affair, or if they can't seem to join you in the work of recovery for any reason, your invitation to your spouse can continue to be loud and clear: "I am still willing to work on our marriage, but I can't do it alone. I need you to do your part." But you need to post your Two Guards and determine to not welcome your partner back into that vulnerable space again unless/until an acceptable answer is given to both questions. Wait for it.

Pam is aware of the price she paid for repeatedly ignoring the caution of her Guards. For the past three months, she has kept the Guards firmly in place. It's probably too late for her marriage, but it is important for her healing. In our last session, I asked her what she would say to herself if she could go back a couple years. She started to cry. "I should have trusted my Guards."